HOW TO STRAIGHTEN RADIATOR CORE FINS 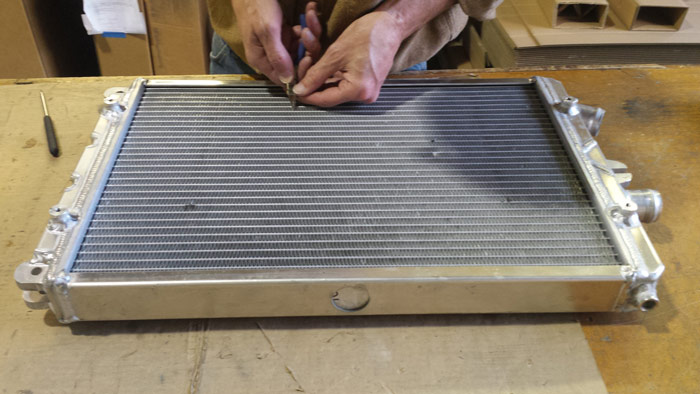 Handling a custom made aluminum radiator can be a hassle. They're amazing pieces of technology that can handle all sorts of heat and pressure, but, by misplacing a hand or finger on the core during installation, you can often bend the thin, sensitive fins on the radiator core.

A couple of bent fins will not make a big affect on the performance of your radiator, but it can affect the visual aesthetic appeal of your new aluminum radiator.

Luckily, if you bent some of fins on your new Wizard Cooling radiator. You can restore your radiator core back to the show quality you received it in fairly easily. There are several methods you can use to straighten out the fins on your radiator:

This method works best if you have fins that are smashed over, preventing airflow. Also, this method works good when trying to re-position the fins to recreate the uniform pattern. Using a simple steel ice pick, carefully insert the ice pick between the fin or fins that are damaged. Then carefully use the steel pick in a light "brushing" method to move the fins back into place. Make sure to be extremely gentle when you start adjusting the fins. They are very sensitive and prone to deformation. Now, this method can be TEDIOUS but if you're willing to spend the time, you're radiator core can slowly be transformed into it's original form.

Most commonly used where there in only minor fin damage. A fin comb is a small tool (found at many hardware and auto stores). It often used to fix HVAC radiator cores but can be used on custom aluminum car radiators too. Using a fin comb is a quick fix, it works by choosing an appropriate size fin adjuster and then pulling the fin comb over the bent fins. Depending on your technique, this can straighten out your fins fairly well, alternatively, you could damage your fins even more. We suggest using a more hands on approach like the Ice Pick Method or our last method; Duck Bill Pliers Method.

This method is about as simple as it gets! If your fans are already in a uniform pattern and are not bent over you can use the technique to further create a more aesthetically pleasing core. Simply take a pair of duck billed pliers, with flat jaws and carefully grasp the damaged fin on the radiator core and gently flatten each fin with the pliers. It's important to not use to much force when adjusting your fins using this method.

When we need to fix any fin damage at the Wizard Cooling facility, we don't take any shortcuts. That's why we combine the Ice Pick Method and the Duck Bill Pliers method for the most effective and presentable fix to any fin damage. After using the steel pick to readjust the fin, we'll simple use the duck billed pliers to ensure the fin is completely straight. Once again, it's very important to be very gentle when using the pliers to flatten a fin. This method is by the far the most time consuming, but the results are absolutely fantastic!

There you have it folks! Four simple methods to easily straighten your fins at home. If you do run into a problem where your radiator wasn't handled properly during instillation, try one of these methods to restore your Wizard Cooling radiator back to show quality. Of the methods described in this article, we highly suggest using the last, Ice Pick and Duck Billed Pliers Method. It may take a bit longer but it's very effective and if done carefully will provide you with the best results.

Have any questions regarding this article or straightening out fins on your Wizard Cooling Radiator or a suggestion for a "How To" article? Contact Us Today to speak with a specialist! 716-655-6760